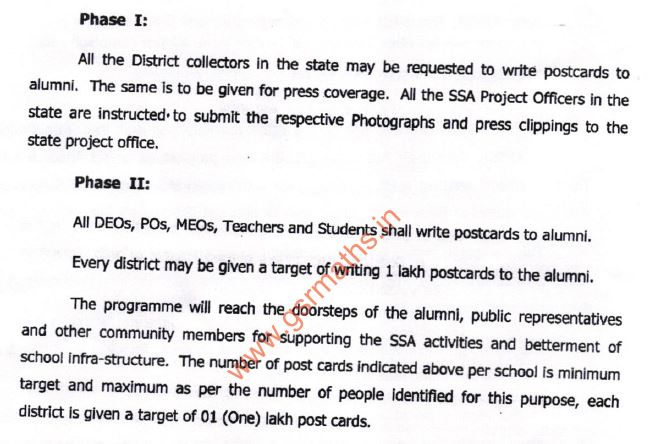 All the Project Officers, SSA   In  the State are infonned that the state  Project Director,  APSSA, Amaravatf  has  Launched the new programme  under "Badl  Runam Thirchukundam" writing a letter campaign with retired IAS officer Sri T.S.Apparao, who is the alumni of Government school In Kesavarao pet, Srlkakulam District.

This campaign alms In writing postcards to government school's alumni by  the students, teachers,  MEOs, POs, District Collectors in a phased manner  to grab support In strengthening of government schools in the state.
The campaign was initiated by the state Project Director, Principal Secretary and
Minister  for HRD by writing letters to the alumni.
In this regard, the  Idea is  to be drilled down to the  school  level  where  each school  shall  Identify the persons   and  write a letter  requesting  their  support in  the betterment of schools.  Similarly at Mandal & District level also the actiVity shall be taken up in  a  grand way Involving the dignitaries like District Collectors, District  level  and Mandal level officers, Teachers, Students for writing letters on behalf of schools and this should get good media attention  which will further spread the spirit  of the movement. In this regard schools with enrollment  less than 60 shall address letters to not less than 20 dignitaries, school with 61-140  shall address not less than 40 dignitaries  & schools with enrolment more than 140 shall address 50 dignitaries and the total  in a district  shall be more than 01 (One) lakh in a campaign mode.

The campaign may be continued in two phases.
Phase  I:
All the  District collectors In the  state may be requested to write postcards to alumni.  The same Is to be given for press coverage.  All the SSA Project Officers in the state are instructed• to submit the respective Photographs and press clippings to the state project office.

Phase  II:
All DEOs, POs, MEOs, Teachers and Students shall write postcards to alumni. Every district may be given a target  of writing 1 lakh postcards to the alumni.
The programme will reach the doorsteps of the alumni,  public representatives and other community  members for supporting the SSA activities and betterment of school Infrastructure.  Toe number of postcards Indicated above per school rs minimum target and maximum  as per the number of people Identified for this purpose, each district  Is given a target of 01 (One) lakh post cards.
Download proceedings copy