Posted by gsr on June 18, 2017
School Education Department - Norms for Rationalization of Schools,Posts and Staff under various managements i.e., Government, ZiliaParishads and Mandai Parishads in the State - Certain Instructions issued and Revised Time schedule for Rationalisation and Transfers 2017 -Rc.4102 Dt.18-6-17
The Government directed to take up Rationalization of posts / Teachers in Government, Zilla Parishad and Mandal Parishad based on the integrated U-DISE data as on 30.04.2017. Any new enrolments done at the school level during "Amma Vodi " or "Mana Vooru - Mana Badi "- programmes, such data may also be entered into the integrated U-DISE with proper validations (Le.
Aadhaar No., No duplicate / double enrolment, transfer certificate from previous school,etc.) and consider for arriving at justified posts in respective schools.
There is no proposal to revise/extend the current transfer schedule. The rationalisation process as per the norms given in G.O.Ms.No.29 School Education (Ser.lI) Department, Dated: 22.05.2017 and G.O.Ms.No.33 SE (ser.lI) Department, Dated:04.06.2017 is more or less completed at the field level and as per the existing schedule 16.06.2017 was the date for publication of the vacancies.
In line with the transfer schedule, as of 18.6.2017, a total of 92,884Teachers have uploaded their transfer applications, including 61 ,880 for Compulsory Transfer and 31 ,004 for Request Transfer.
Keeping in view the above situation, all the DEOs in the State are instructed to obtain the data of un-entered enrolment particulars of the specific schools duly certified by the concerned Headmasters and MEOs in the proforma indicated in Annexure 1. The consolidated list of additional enrolment may be emailed to udise2016ap@gmail.com by 5 pm on 19 and 20 June 2017.
The rationalisation exercise in the district may be reviewed once again. Where the school is justified to continue or additional number of posts are required to be given in specific schools after taking into consideration the additional enrolments certified by the respective HM and MEO, the same may be done. After ensuring the necessary modifications the final list of schools to be rationalised/consolidated/merged and the final vacancy list arrived at should be uploaded 20.6.2017.
In order to facilitate the above process, the provisional seniority list will be published on 21-6-2017 instead of 19.06.2017. It shall be noted by all concerned that the transfer schedule at Annexure II  is to be strictly followed. All the transferred Teachers should join in their new schools by 6.7.2017.
Regional Joint Directors of School Education and District Educational Officers are once again instructed to complete the rationalisation and transfer exercise as per the schedule.
Any manipulation of data of students entered to show higher enrolment will be viewed severely.
Receipt of these proceedings should be acknowledged forthwith.
Encl: As above 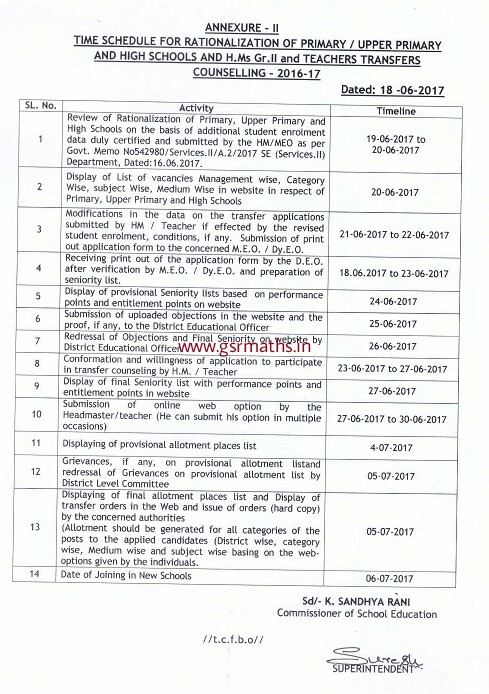