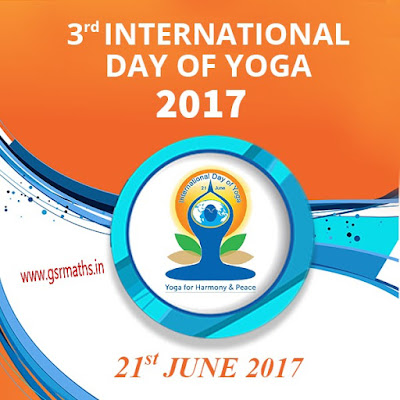 All the Regional Joint Directors and the District Educational Officers in the State are informed that Government has issued orders in the G.O 1st read above for implementing Yoga or Meditation in all the schools as a part and parcel of Physical Literacy from the Academic Year 2016-17.
Further, Government of India has passed a resolution on celebrating the International Day of Yoga i.e. 21 st June. The resolution recognizes that Yoga provides a holistic approach to health and well-being and wider dissemination of information about the benefits of practicing Yoga for the health of the world population. Besides, Government of India has issued a Yoga Protocol to be
practiced in all the Schools. As per the Protocol, the Yoga is to be practiced in all the schools from classes VI to X.
Vide this office proceeding 3rd read above instructions were issued for celebrating International Day of Yoga on 21 st June. It has been decided to take forward the momentum created by the participation in Yoga Day Celebrations 2015 & 2016 with greater vigour and participation.
In view of the above circumstances and on the occasion of 3 rd International Day of Yoga (21st June 2017), and as requested by the Commissioner, AYUSH Department, Vijayawada vide reference 4th read above, it is proposed to enlighten the school children about the importance of Yoga through special programmes. The main programme would be Mass Yoga Demonstrations from 7 A.M. to 8 A.M. by following the common Yoga Protocol (CYP) at the State, District, Mandal and Panchayat Level. Other events could include Yoga fests, Seminars, Workshops, Musical and Cultural Programme based on Yoga in the 3rd International Day of Yoga on 21 st June, 2017.
The RJDSEs/ DEOs in the Sate are, therefore, requested to see the Protocol on Yoga, issued by Government of India, implemented in all the schools on 21 st June 2017 without fail.
They are further requested to
• Issue suitable instructions to all the School Head Masters / Teachers to celebrate the 21 st June as International Yoga Day educating all the stake holders encouraging self-trust and revitalizes energy level for daily activity.
• Involve a reputed Yoga Organizations and organizes programmes at schools to highlight the importance of Yoga without financial commitments.
• The Inspecting Officers like Deputy Educational Officer and Mandal Educational Officers should participate in the Yoga programme on 21-06-2017.
• The Physical Education Teachers, who have recently undergone Master Training Program with lsha Yoga should organize a session program on Yoga in their schools. If there is no Physical Education Teacher in the School, the teacher, who is well acquainted with Yoga and willing to promote Yoga should take responsibility.
• Implementation of Yoga and/ or Meditation is mandatory for all types of Educational Institutions under all managements.
• Involve/invite local peoples' representatives to participate in the programme.
The RJDSEs and DEOs are further instructed to ensure that a good number of students/teachers/ officials participated in the International Yoga Day celebrations and required logistical support is provided to the programme/event.
This must be given top priority.
K. SANDHYA RANI
COMMISSIONER OF SCHOOL EDUCATION
Download proceedings copy