Home » Latest Updates » Taxpayers how to link their PAN with Aadhaar

Taxpayers how to link their PAN with Aadhaar

Posted by gsr on June 30, 2017 | Posted under : Latest Updates
simplified process to complete the linking of Aadhaar with PAN
The Income Tax Department has made it easy for taxpayers to link their PAN with Aadhaar.

It was reported that taxpayers were finding it difficult as their names did not match in both systems (Eg. Names with initials in one and expanded initials in another). Responding to such grievances,the Dept has come out with a simple solution now.

Just go to www.incometaxindiaefiling.gov.in and click on the link on the left pane -> Link Aadhaar. 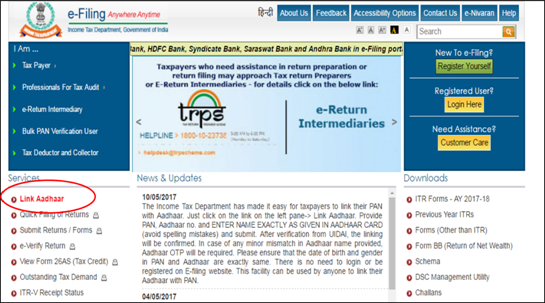 Provide PAN, Aadhaar no. and ENTER NAME EXACTLY AS GIVEN IN AADHAAR CARD (avoid spelling mistakes) and submit. After verification from UIDAI, the linking will be confirmed.

In case of any minor mismatch in Aadhaar name provided by you when compared to the actual data in Aadhaar, One Time Password (Aadhaar OTP) will be sent to the mobile registered with Aadhaar which has to be provided. Please ensure that the date of birth and gender in PAN and Aadhaar are exactly same. There is no need to login or be registered on E-filing website. This facility can be used by anyone to link their Aadhaar with PAN.

In a rare case where Aadhaar name is completely different from name in PAN, then the linking will fail and taxpayer will be prompted to change the name in either Aadhaar or in PAN database.

This facility is also available after login. Go to Profile settings and choose Aadhaar linking. The details as per PAN are pre-populated. Enter Aadhaar no. and ENTER NAME EXACTLY AS GIVEN IN AADHAAR CARD (avoid spelling mistakes) and submit.


This will be useful for E-Verification of Income Tax returns using Aadhaar OTP.

MINISTRY OF FINANCE
(Department of Revenue)
NOTIFICATION
New Delhi, the 11th May, 2017
S.O. 1513 (E).—In exercise of the powers conferred by sub-section (3) of section 139AA of the Income-tax Act, 1961 (43 of 1961), the Central Government hereby notifies that the provisions of section 139AA shall not apply to an individual who does not possess the Aadhaar number or the Enrolment ID and is:-
(i) residing in the States of Assam, Jammu and Kashmir and Meghalaya;
(ii) a non-resident as per the Income-tax Act, 1961;
(iii) of the age of eighty years or more at any time during the previous year;
(iv) not a citizen of India.
2. This notification shall come into force with effect from the 1st day of July, 2017.
[Notification No. 37/2017, F. No. 370133/6/2017-TPL]
Click here to Link your PAn with Aadhar