In the circumstances reported by the Director of School Education, AP and me State Project Director, APSS in the reference cited, Government after carefu Examination of the matter, hereby accord permission to the State Projec Director, APSS, to conduct elections to reconstitute the Parents Committees the State, as per schedule below: 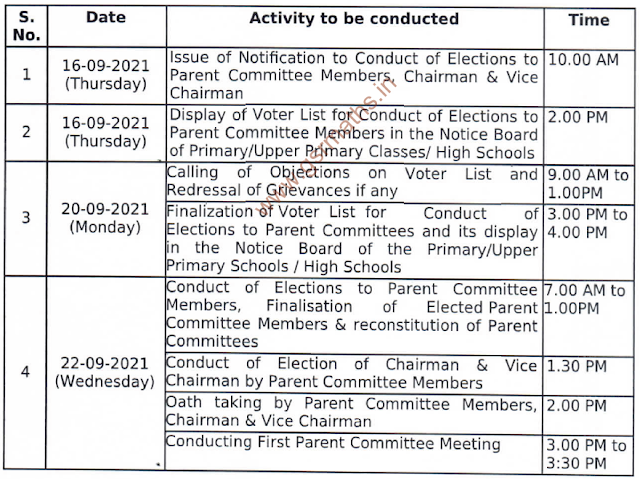 It is instructed to issue necessary instructions to all the DYEOs, MEOs and concerned school Headmasters to follow the schedule and guidelines issued in the ref 1st & 2nd cited.

Therefore all the District Education officers and Additional Project Coordinators of Samagra Shiksha in the state are instructed to follow the schedule in the ref 1st cited without any deviation.

This should be treated as most urgent.

The composition of the Committee will be as follows:

Elected members: Three parents / guardians elected by parents / guardians of children in each class, of whom at least one person is parent/ guardian of a child from the disadvantaged group and another person is a parent/guardian of a child belonging to weaker sections, and two are women. Provided that, in case, the number of children in a class is less than 6, the same shall be combined with the next lower or higher class, such that the number of electors in the combined class is 6 or more.

The term of an elected member will be for two years, or the date of leaving-from-the school of the member's child/ward, whichever is earlier.

New parent/guardian members from entry class will be inducted into the PC to replace those parent members who will move out of the PC when their children leave school. .

2. Additional Teacher Member nominated by the MEO preferably from the gender opposite to that of the Head Teacher;

3. The concerned Corporator / Councilor / Ward Member, as the case may be;

4. The Anganwadi Worker(s) serving the neighborhood area of the school;

5. The Multipurpose Health Worker - Female (ANM) serving the neighborhood area of the school;

6. The President of Mahila Samakhya of the concerned village/ward.

Coopted members: Two school supporters from among persons who is an eminent educationist, a philanthropist, office bearer of a voluntary organization, an alumni or such other supporter of the school; coopted by the elected members of the PC.

The term of coopeted members shall be two years from the date of first meeting following the date of cooption.

Local-Authority-Chairperson: The concerned Sarpanch/Municipal Chairperson/ Mayor may attend any meeting of Parent Monitoring Committee in their respective areas, at his/her discretion.

New admissions: The parent/guardian of the child who is enrolled on or after publication of reconstitution notice by the concerned school is not eligible to participate in the election.

Chairperson: Guardian cannot be elected as chairman in case any of the parent . members of the child is alive. The HM concerned will be held responsible in such cases, if any.

Parents in neighboring states: The parents belong to neighbouring states such as Orissa where as the students are studying in the schools of our state are also eligible to participate in Parent Committee election as per the norms. .

Quorum: Class Wise election will take place and the quorum is to be observed class wiseonly.

Financial assistance: The expenditure for the parents committee reconstitution to be met from composite school grants of the respective schools.

Convener: The elections will be conducted by the concerned head master or In-charge teacher where there is no head teacher. In GPS schools CRTS working on contract basis as head of the school may act as conveners.

No outsider to be allowed: At any cost persons other than parents shall not participate in the election nor they should be allowed in the premises at the time of election. If required, police support may also be requisitioned with the approval of the district collector and district magistrate.

Uploading of data: In case of weak signal, the data with regard to Parents Committee election and meeting to be uploaded in the network area by the Supporting functionaries.

There should not be any deviations from the guidelines regarding the Parent Committee election.

Note: The guidelines are prepared as per the Andhra Pradesh Right of Children to Free and Compulsory Education Rules 2010 and GO Ms. No. 41 dated 19.03.2013 - Download

All the stakeholders are hereby directed to strictly follow Covid-19 safety precautions and measures during this entire process.