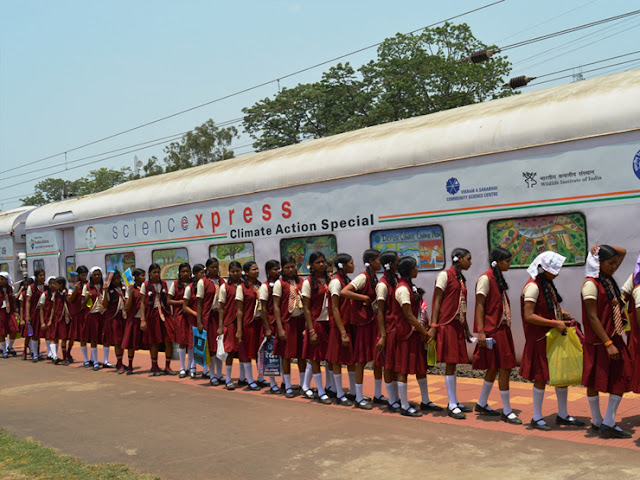 The attention of the all the Regional Joint Director of School Education and District Educational Officers m the State is invited to the reference read above, copy enclosed where in the Additional Secretary, Minister of Environment. Forest & Climate Change has informed that the Science Express Climate Action Special train SECAS train is an innovative mobile science exhibition mounted on a 16 coach AC travel, which has been custom -build for Department of SCience & Technology (DST) by Indian Railways. The tram is being run by the Ministry of EnVironment, Forest & Climate Change, m partnership with Department of SCience & Technology and Indian Railways. ThIS unique mobile exhibition was first launched in October 2007 by DST. It has smce then made eIght tours of the country, travelling about 142000 km and exhibiting at 455 locations. The ninth phase of the Science Express Climate Action Special (SECAS II) has been nagged off on 17 February 2017. Jointly by Shn. Suresh Prabhu, Minister of Railways, Dr. Harsh Vardhan. Minister of SCience & Technology and Earth Sciences and Shri. Anil Madhav , Minister of Environment. Forest 7 Climate Change from Deihl Safdarjung Railway Station.

Further, the Additional Secretary, Minister of Environment, Forest & Climate Change has informed that the SECAS II will run from 17 February 2017 to 8 September 2017, over 19000 km during which it will be exhibited at 68 stations across India. The state -of -the -art exhibition on board the SECAS aims to create awareness among various sections of society as to how climate change cun be combated through mitigation and adaptation. The exhibition will convey a message about climate change and will also be a good opportunity  to conduct dialogue and discussions. More details may be accessed at link http://www.sciencexpress.in
Further, the Additional Secretary. Minister of Environment, Forest & Climate Change has requested the Secretary, Department of School Education and Literacy), MHRD New Delhi 10 issue necessary instructions  issued to the concerned Secretaries of School Education 10 encourage Ihe school children to visit this tram by giving wide publicity. Principles of Navodaya Vidyalayas,High Schools and Colleges may also be instructed to visit the exhibition while the train is at the respective stations in the concerned States.
In this context, they are informed that the Science Express Climate Action Special (SECAS II) train will stay at Kothavalasa on 20-23 May 2017, Gudivada on 24 -26 May 2017.
Therefore, all Regional Directors of School Education and all the District Education Officers in the State are requested to issue necessary ;n»,ructions to all Dy. Educational Officers,Mandal Educational Officers and Headmasters of all managements of all schools under their jurisdiction to encourage the school children to visit this train by giving wide publicity.