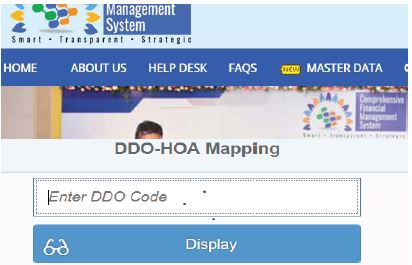 The users have to keep in mind that just because DDO – HoA mapping exists in the system , that HoA will not be available to the maker automatically to create bills without configuring the workflow. On confirmation that DDO – HoA mapping exists, Head of the Office has to configure the workflow for that HoA so that maker can create the bill and Treasury workflow for that DDO‐ HoA combination is also a pre‐requisite for that DDO to submit the bill, Otherwise DDO will get error message of “ Approver not Maintained”

Vide G.O Ms. No 65 Fin Dt. 25.04.2017 and G.O.Ms. No 184 Fin Dt. 14.11.2017, The Govt. has issued orders to rationalise jurisdiction of Sub treasuries based on geographical locations. Due to this rationalization 2480 DDOs are effected and their treasury jurisdiction will be changed. To implement this change i.e. moving DDO from one treasury to another treasury in CFMS there should not be any pending bills which are in approval process w.r.to that particular DDO. Duly considering this, till now 2264 DDOs are assigned to respective new treasuries in CFMS in 5 phases, which were communicated by DTA and the rest of 216 DDOs will be done shortly whenever the bill process is stopped and this fact is communicated to CFMS.

Some departments have taken decision to rationalize the no. of DDOs in their departments by centralising drawing powers at different levels. Eg. Social Welfare, Tribal Welfare and B.C. Welfare departments. In Social welfare department, the DDO powers of Hostel welfare Officers are rescinded and now vested with ASWOs. Hence the DDO codes of HWOs are delimited and Org. Unit of that HWO is assigned to ASWO’s Org. Unit as Sub Org unit under that. The cadre strength of that HWO’s office is moved to ASWO’s office in HRMS so that ASWO can prepare and submit pay bills of the staff of HWO’s office. This process is same for all the departments where ever rationalization of DDO codes has been taken up.


Going forward there is no smart coding w.r.to DDO Codes in CFMS. All the New DDO codes will be created in series of 9000. In case of existing DDO codes, the same DDO code will not be changed even if the office of particular DDO changes from one treasury jurisdiction to another treasury jurisdiction.

There are several requests for cancellation of bills from treasury officers / PAOs and in some cases directly from DDOs with reasons like wrong selection of vendor code / HoA etc., sometimes with a reason that instead of return button, approval button was clicked and sometimes with unexplained reasons. While it is advised that concern staff should take additional precautions in bill preparation / bill submission/bill processing, the process of returning / cancelling the bill while the bills are at maker / checker/ submitter / auditor / verifier levels depend upon the nature of request and also on reason for return / cancellation. This activity has to be carried out at DDO / T.O levels without creating an incident or reaching out to the CFMS Helpdesk. In respect of cases where the bill has already been approved and there is a request to return / cancel that bill, it is to be noted that this cannot be performed in CFMS by the team, the process that is to be followed in all such cases is approval of the finance department may be obtained for cancellation. The reason for approval action sent to finance department is because it is an exception action which can only be authorised by finance department. However it may have to be noted that such cases should be avoided as the payment may get released immediately after the approval by T.O. based on the timings of pay release cycle run. Therefore such practice needs to be adopted only in extreme circumstances and the DDOs / T.Os are required to exercise extra caution ensuring right beneficiaries / HoAs are selected.

There is NO Edit option available in CFMS to make changes in works master, once it is created. But it has been observed that several requests are coming for edit option due to the following circumstances:


 Wrong selection of HoA / Authorities
 Mistakes in data entry of previous payment details
 Typo errors in entry of Agreement Validity period / BG details etc. However CFMS helpdesk cannot make a judgement about the correctness of the requests, hence these requests should be routed through concern HOD and DWA and such cases will not be handled through helpdesk tickets.


A provision has been given to DDO to hire an employee and to generate a CFMS ID through CFMS Hiring Event. To do this, DDO has to login and click on CFMS Hiring Event tile which will open Proforma on request for new employee / CFMS‐ ID. Once DDO completes the data entry, he/she has to authenticate with biometrics to submit employee data to create CFMS ID. DDOs are sending Letters along with data entry input forms to APCFSS requesting creation of Employee Code, No action will be taken on these letters. All requests to create CFMS / HRMS employee ID have to come through DDOs login in CFMS.


Provision for EEL Bill is available in CFMS and All EEL bills shall be preferred directly in CFMS.