Posted by gsr on October 15, 2017 | Posted under : Latest Updates
Swachh Vidyalaya Puraskar 2017-18 - Methodology for Selection of Schools for the Awards - Weightage Assigned to Swachh Vidyalaya Sub-categories - Categories of Awards - Stages and Timelines of the Awards Process
The Swachh Vidyalaya Puraskar (SVP) was instituted in 2016 - 17 by the Ministry of Human Resource Development, Department of School Educaton and Literacy, Government of India to recognize, inspire and celebrate excellence in sanitation and hygiene prac ce in Schools. The explicit purpose of the awards is to honour schools that have undertaken significant steps towards fulfilling themandate of the Swachh Vidyalaya Campaign. SVP 2016 - 17 received over whelming response with over 2.5 lakh schools from 35 States and UTs submtting the entries. SVP 2017 - 18 builds on the experience and success of SVP 2016 - 17.
The awards will be open to (a) Government and aided schools; and (b) Private schools, in both rural and urban areas. 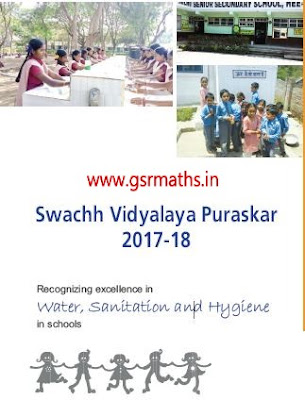 Methodology for Selection of Schools for the Awards
The process for identifying and recognizing schools for awards is as below:

I. Schools will register and submit information as per the prescribed format (Annexure 1) made available online (→Swachh Vidyalaya http://mhrd.gov.in→Swachh Vidyalaya Puraskar 2017-18) or by downloading a mobile app, Swachh Vidyalaya Puraskar 2017 - 18. The mobile app can be downloaded from Google Play Store or apple istore. The registration of schools would be done with the U-DISE code of the school.
II. The website/mobile app was customized to cater to different categories of schools.
III. Schools are expected to provide accurate information as required in the format.
IV. The information in the format corresponds to the requirements in Swachh Vidyalaya guidelines. Annexure 2 provides the list of indicators categorised under (a)Water (b) Toilets (c) Handwashing with Soap (d) Operations and Maintenance and (e) Behavior Change and Capacity building.
V. Maximumweightage assigned for each of the Sub-categories is given in Table 1:

Stages and Timelines of the Awards Process